See the latest information from England Hockey for our current umpires and anyone interested in getting involved in umpiring.

We are delighted to launch a subscription based offer for umpires at all levels of the game. With the commencement of online educational forums and workshops throughout the COVID-19 pandemic, we’ve decided to open our libraries of specialist individuals’ advice and guidance to anyone within the “umpiring family” through an exclusive membership offer.

There will be 2 levels of membership (including a free membership level) where specialist, insightful and supportive educational material and comment boards will be made available for individuals to help undertake their own development for their umpiring.

The EHUmpiring membership is available now! A brief overview of the details of what benefits members can experience, please see below and click on the button to become a part of England Hockey Umpire Membership. 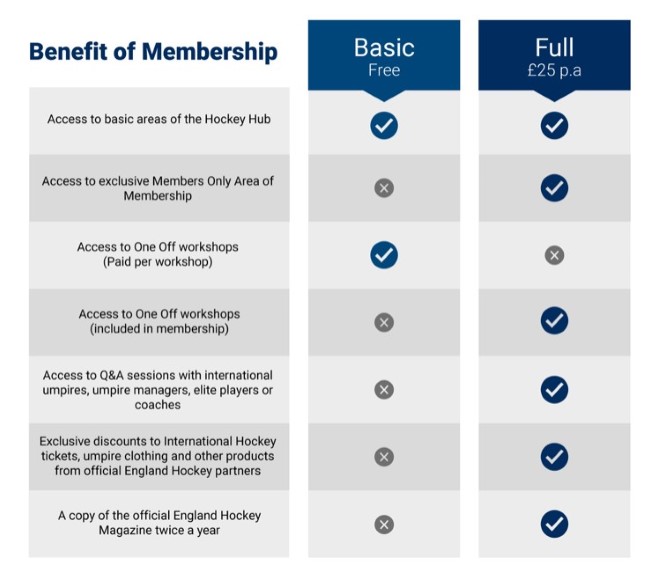 We are continuing to deliver our full suite of courses during this time (virtually of course) and would like to pay thanks to all those who have attended and to our Tutor Workforce who have allowed us to continue delivering during these challenging times. You can still attend all the courses below plus some monthly members events:

Book onto any of these courses by clicking the button below.

As a committee we first hope you are all keeping well and continue to through this difficult period.

Over the last week we had been discussing whether we could resume hockey on Wednesday 6th January as a Tier 3 club and there were valid arguments on both sides. Sadly, this decision has been made for us after the announcement of another national lock down last night.

The 2020/21 season has been up and down and I am sure we are all glad that we have been able to have some time on the pitch together.

Hopefully with the role out of vaccines the situation will have improved over the coming months.

We hope you and your families stay safe and well, best wishes.

Over the past few months, we have been looking at a new playing kit, that we are going to introduce next season (not yet available).

To go with that, and for purchase now, we are also offering some branded training gear – hoodies, tracksuit tops & bottoms, hats, etc.

Our online store is now live (link below), and some of this gear might make excellent Christmas presents for yourself, or for someone who plays hockey for the club.

Please note – to guarantee delivery before Christmas, you need to get your order in BEFORE next weekend (12th December).

Whitchurch returned to competitive hockey, and to winning ways, this week playing Deeside Ramblers Men’s 5s in the newly formed, pandemic-enforced Cheshire West 2 league. After some persistent rain in the morning, the sun came out and provided a perfect setting for a resumption of the interrupted season. Whitchurch were able to field a full-strength team with the Wales-based players available again, and did so – for the first two minutes before Sam Budd picked up a game-ending injury after rolling his ankle during an early attack.

Thankfully they had a sub, and so the game began again without the option of using rested impact-players coming on from the bench, and captain Danny Foulkes reiterated the need to make the ball do the work rather than players running themselves ragged. The key was to take the good work put in before the last lockdown and repeat that – with the added need to make the most of the opportunities in the opposition dee.

Whitchurch applied themselves well, against a Deeside team that was a mixture of youth and speed up front, and experience and control at the back. The Deeside keeper had another excellent game making a number of superb saves, but today was going to be the Reds’ day, and it started with good control, keeping the ball and driving down the right time and again. Eventually a short corner was won, and was slipped left and right before it returned to the top of the dee where Jack Barnes belted it in.

This was followed shortly by another short corner, and Barnes was on hand again to receive the injection and flick it under the keeper. Deeside started to recover, and were able to make some incisive runs with high players receiving the ball well and driving to the dee, but Paul “Sturge” Leigh was again fantastic in the Whitchurch goal, sliding out to block incoming passes when the defence were still on their way back, and diving well to block the shots that Deeside could get away. Overall, the defence was solid, with Foulkes, Sam Conway and James Partington working well together to get the ball out. In front of them, Steve Kay had an impressive game holding the centre of the pitch and providing an outlet time and again before considering options and getting a good pass away up the pitch. Equally, the midfield – with Joel Leese, Barnes, Joe Coburn and Ben Kimberley – worked well going forward as a unit, but weren’t afraid to recycle it all the way back to Foulkes if that was the right option.

Up front, Tom Forster and Chris Ruscoe – in a change from his usual defensive duties – caused Deeside’s defence plenty of trouble, and it was Ruscoe who scored next, with a darting run down the right hand side of the pitch before getting into the dee and drilling it into the bottom corner of the goal.

In the second half, it was more of the same, as Kimberley and Forster worked the left-hand side of the pitch with some one-two passes, before Kimberley got his shot away in style. The game then took a turn as Conway picked up an injury and shortly after a green card took the Reds down to nine players, but Kay dropped back into defence so Foulkes could cover Conway, and Whitchurch then went into keep-ball mode, running down the clock before both players could make their way back onto the pitch. Deeside had made a number of attacks during this time, but Sturge was solid and the tackling in the defence was effective, and with eleven players finally back on the pitch the Reds could turn up the wick again.

The commitment was brilliantly shown with the next goal, as Coburn fought his way into the dee and rode six or seven stick-tackles that could each have led to a short corner, as the advantage was played well by the umpires, until he was able to flick the ball over the Deeside keeper for an excellent goal to add to his impressive tally. Ruscoe then went on another run down the right wing before getting into the dee and firing the ball into the centre of the net. The game was wrapped up with a seventh as Leese’s shot bounced off the keeper and Forster was on-hand to clean up and put the ball away.

There could have been more goals, but this was an impressive return to hockey for Whitchurch, again thanks to the depth and strength of the squad, and putting into games the routines and skills learned during training sessions. Player of the match was, again, Joe Coburn – his goal was typical of his play throughout the game, consistently working hard, never giving up and using sublime skills to beat the opposition.

After lockdown, new tier regulations, a revised league structure for the rest of the season and a struggle to get enough players, the Men’s 2s returned to competitive hockey with a trip to Chester 6s.

The home side started positively but Whitchurch quickly settled into the game and assumed a control that they never relinquished. Chester found themselves penned in their own half, and anytime they did make progress into the Whitchurch half, Brendan Coburn, Wyn Morris and Gareth Teggin were quick to tidy up and set the 2s back on the attack.

Chances came and went. Good work down the right saw Fred Egerton smash a shot against the crossbar, and both Luke Beddow and Euan Morris fired wide when we’ll placed. The excellent Chester keeper made a succession of smart saves to frustrate Whitchurch, but eventually the pressure paid dividends. Midway through the first half, with Chester trying to move forward, Whitchurch won the ball in midfield and set 3 players clear of the home defence. Luke Beddow calmly rounded the onrushing keeper and swept the ball into the unguarded goal.

Despite losing Doug Buckeridge to a nasty ankle injury, Whitchurch continued to push forward and the Chester keeper made more good saves, and final passes between the Whitchurch players weren’t quite finding their intended targets, which Jake Buckeridge just unable to steer home a vicious cross from the right. But as half time approached, Euan Morris deservedly doubled the Whitchurch lead.

The 2s completely controlled the second half with keeper Neil Jones a virtual spectator. Richard Leigh orchestrated the Whitchurch play, organising the younger players from the centre of midfield.

Much of the game was now being played in and around the Chester dee and Ethan Gresty, Fred Egerton, Joe Faithfull, and Alex Leigh were all heavily involved in the action; all of them getting shots at goal, or being close to scoring. Further goals were added in the second half by Luke Beddow, Euan Morris (who completed his hat trick) and Jacob Buckeridge.

Although Whitchurch thoroughly deserved the 6-0 victory, the score line could have been much bigger. The Chester keeper had a fantastic game, making several excellent saves. But Whitchurch were incredibly wasteful in the second half. Too many players were intent on adding to their personal goal tally, taking on extravagant shots, when there were simple passes to better-placed teammates available.

A special mention for Will Snaith, who despite playing on the left side of defence, spent most of the game as a second left winger. He continually made himself available for passes forward and was an excellent support for the players in front of him, whilst never neglecting his defensive duties.

Many thanks for Chester in getting the fixture sorted out after the recent lockdown. The game was played and umpired in an excellent spirit and the Chester players were very supportive in a physical and medical capacity with Doug’s injury.

Whitchurch Men’s 2s will be playing their final game before the Christmas break at SJT on Saturday 12th December against Winnington Park 4s.