Whitchurch ladies 3s travelled to sandbach for their last match of the season.

Whitchurch knew that this was going to be a tough match but they came out fighting with Whitchurch winning the toss. Eleanor Beecher, Sophie Jones and Lucy Hearn drove the ball from the off into the Sandbach dee creating chances on goal. But with all their efforts Sandbach collected the ball and drove to the Whitchurch defence of Sue Read, Maisie Bennett, Ellie Wilson and Rachel Chesters who put up a fight with the Sandbach attack. Sandbach won a short corner and they managed to slot the ball past the Whitchurch keeper of Louise Cottrell.
This drove Whitchurch on to want to equalise but with countless efforts from Jones, Beecher and Hearn switching the play back across to Harriet Slater who narrowly missed the goal. Whitchurch kept pushing and won a short corner which narrowly missed a deflection from Freya Gresty working tirelessly in the middle.
Halftime, Whitchurch regrouped and wanted to equalise with sandbach. Evie Hall and Jess Hunt worked tirelessly together and won a sideline ball which Hall navigated through the sandbach defence to pick out Gresty who slapped it home to Hearn who slotted it past the sandbach keeper bringing the score line to 1-1.
Sandbach didn’t want it to end there they worked there way past the Whitchurch defence who then fired it across to Gresty who made some fast runs down the middle to Hearn who narrowly missed the post.
Sandbach pressed hard on Whitchurch and slotted it past Cottrell on the back foot. Bringing the score line to 2-1 at final time.
Lucy Hearn was awarded player of the match.

Whitchurch entered the match with high spirits, looking for a win. Whitchurch quickly took control of the match, dominating play with a string of inter-linking passes between Molly Fry and Captain Cath Gresty. Lisa Sullivan effortlessly made numerous runs into the dee, with centre forward Ellie Pearson’s excellent shots on goal being saved by Lymm’s strong defence.

However, Whitchurch persisted, and the ball stayed up high, close to the Lymm goal. Mollie Bell worked tirelessly as left half, working well with left forward Izzy Huxley, and causing yet more pressure on the Lymm dee. The hard work paid off and Sullivan scored an amazing goal from a well-played short, securing Whitchurch their first goal of the match.

However, following a quick break, Lymm managed to score off a short corner taking the goal to 1-1. Unfazed, Whitchurch fought back. Chloe Lloyd and Hayleigh Busby played excellently in defence, quickly picking up any further Lymm breakthroughs. Continued pressure from the forwards resulted in Ellie Pearson easily slotting the ball past the keeper, taking the score to 2-1 at half time.

Whitchurch returned to the pitch motivated and ready to continue their control of gameplay. Right-wing Amelie Morris made numerous great runs down the wing, supported by right half Holly Gilbert. Keeper Holly Edwards maintained her top form, making numerous great saves. Whitchurch didn’t tire and continued to work well as a team with a powerful shot from Pearson leading to another goal. Maintaining their strong pace, Whitchurch battled in the Lymm dee, with Morris on post slotting the ball past the keeper taking the score to 4-1 as the final whistle blew.

Next week, Whitchurch are playing Knutsford Ladies 1s away.

Whitchurch Ladies 2s were looking forward to their last game of the season, hosting Macclesfield Ladies 4s at Whitchurch Leisure Centre. They knew it was going to be a tough and important game as a win by Whitchurch would guarantee promotion. With some of the regular players off with Covid, Whitchurch took a while to find their form. The game started equally matched, with both sides enjoying periods of possession and Macclesfield’s strong defence frustrating Whitchurch’s goal efforts. Jaz Williams, Indy Freer and Emily Curzon’s worked well, passing between themselves to get the ball up the pitch with many attempts on goal, but Macclesfield packed their dee and an agile keeper kept it to 0-0 at half time.

After refuelling on sweets, Whitchurch started the second half the stronger of the two teams with Hermione Ball, Emma Stubbs, Chloe Lloyd and Amy Fry pressing high to stop any Macclesfield breaks developing. This led to a player overload in the Macclesfield’s dee, with Bella Morris skilfully gaining Whitchurch a short corner which, following a goalmouth scramble, Phoebe Jones nudged over the line to gain a well-needed goal for Whitchurch. Macclesfield did not give up, with some well-taken 16s and runs down the pitch, but keeper Gwyn Rees-Thomas had a quiet game with the Whitchurch backs effectively shutting down these attacks. Fuelled by their hunger for promotion, Whitchurch strung together good passing runs by Williams, Poppy Huxley and Bella Morris who took the ball up the pitch, feeding it into Jones in the dee to slip to Curzon for her to pound it into the back of the Macclesfield net, giving Whitchurch a more comfortable two goal lead. Whitchurch continued to push on, winning numerous short corners and overloading the dee, with lots of good defending and goalkeeping by Macclesfield keeping the score line at 2-0 when the final whistle blew. Phoebe Jones was awarded Player of the Match for the second week in a row. With Whitchurch Ladies 2s finishing second in the league, the team were able to look back at their successful season and discuss their promotion over cakes baked by Poppy Huxley.

It was never going to be an easy game against the high-flying Knutsford side and with six regulars absent several players stepped up from the 2s into the 1s.

Whitchurch continued to push through the midfield of Alex Fry and Dale Seymour and with the blistering runs of Alex Leigh down the right-wing Whitchurch always looked dangerous on the break.

As the half progressed and Whitchurch started to tire Knutsford took full advantage and scored a number of quick goals to give them a comfortable lead.

The half time break gave Whitchurch the chance to regroup and get their breaths back and the second half started with Sam Conway, captain Danny Foulkes, Will Snaith and Harry Foulkes moving the back around the back through the Whitchurch defence to create opportunities for Tom Forster to attack down the left-hand side.

Knutsford moved the ball quickly and as they found gaps, they were clinical in front of goal to again score several goals. Whitchurch kept working and were rewarded with a goal from a neatly worked short corner which was deflected home by Luke Beddows.

Whitchurch continued to work tirelessly to the final whistle and had a string of short corner in the final minutes of the game that they were unlucky not to convert.

Attached is a photo of the ladies 2s celebrating their promotion as North West Women’s Division 6 South (Central) divison runners up. 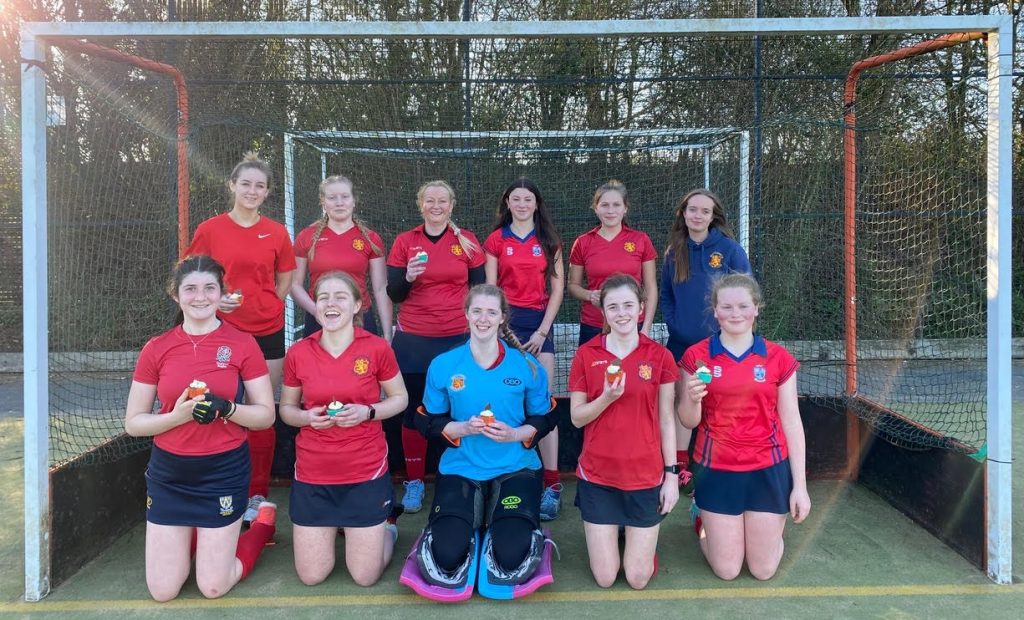